The World according to Ruthiepooh

The World according to Ruthiepooh

I discovered BJDs in the late summer of 2016. More precisely I discovered Fairyland Antes. My Thumbelina, an 11cm pukipuki ante

arrived on Halloween and by then I was already hooked on knitting miniature clothes for her.

It has been a long process, but since then my techniques have gotten better in an infinite project to make her perfect.

Thumbelina arrived as a blank BJD directly from CP/ Fairyland. On her first days with me she looked like a little alien in too big clothes. Then, besides getting her clothes and shoes right, there were three major things I needed to worry about; faceup, eyes and wig.

I ordered the wrong size eyes at first, but now she wears oval 6mm glass, grey- green like mine own. She is loosely based on myself as a kid.

Faceup took a little studying since I had to know which mediums that I could use without damaging her resin. Also, I think it took me a while to find the right varnish. The first faceup flaked so I had to touch her up quite soon. She wore that faceup for a long while before finally I felt confident to paint her again and get her closer to her original faceup. She had a total redo of her faceup in 2020 when she had gotten shiny and yellowed.

Finding the right wig was hard. After buying five different ones and not really liking one, I decided to try making one. The first one was made very carefully. Wig making takes a lot of patience as it is rather messy. Still, the result, pherhaps understandably, was not perfect. I wanted to try again with some finer hair in a slightly more natural color. The one she is wearing now was made the summer of 2019, three years after she arrived.

Finally Thumbelina is much like I ment for her to be, although there is always room for improvement!

BJDs can be very addictive. Offcourse, like many before me, I had decided this was supposed to be my only BJD. I was successful at that for almost a year. 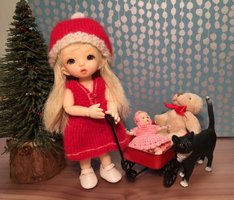 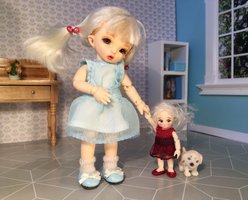 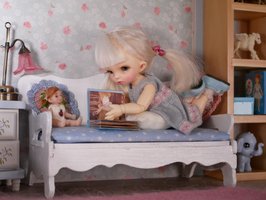